BM farmhouse is a proposal for a weekend home as an extension to an existing house and a recreation area on a large contoured site. The project was done as a part of an invited competition by the client. The proposal for the recreation area was given by us around 3 years ago, which has been considered as existing context here.

The program of the home needed to accommodate a large space to entertain guests with a kitchen big enough to cater to them. Along with that, it needed to incorporate 3 bedrooms, a home theatre and a gym. A rough area allocated to the site this house, was on a mound to the east of the existing house, such that the recreation area would fit in between the two homes in the valley. There was a large space for rainwater to collect to the south of this mound as it is one of the lowest points in the site.

The proposal responds to this water body the most, by creating an almost completely open pavilion facing this valley and the heavily landscape covered mound behind it. This pavilion, housing large living & dining areas and the kitchen, is created at almost the same level as the existing house, so on could use the bridge on the site going above the recreation area to move from one house to the other. This is also the only part of the house that is largely visible, hence hiding its scale. Underneath the pavilion, the bedrooms, as well as the home theatre and gym areas, are placed, hence giving them privacy and at the same time a closer connection to the water. This is at around the same level as the recreation area. A car park is provided to the east of the house. To the north is singular long staircase connecting both levels, with the main entrance at the mid-landing. This part also becomes the main movement area, so that all the spaces get uninterrupted views to the south. There are three entries to this house, one from the existing house using the bridge, one from the car park using a long ramp and the last directly from the recreation zone.

The lower floor is conceived to be heavy and massive going with a similar language as the recreation area, almost as if the mound is carved out to create spaces within. Whereas the upper pavilion is a light structure placed on top of with glass all around and a fluid roof that cantilevers out dramatically shading the spaces from the sun. The few walls that do exist on this level, match the exposed brickwork of the existing house, with a wooden screen for security proposes towards the entrance. The roof is slightly sloped towards the south with the fluid shapes acting as gargoyles to lead the rainwater to the collection area. 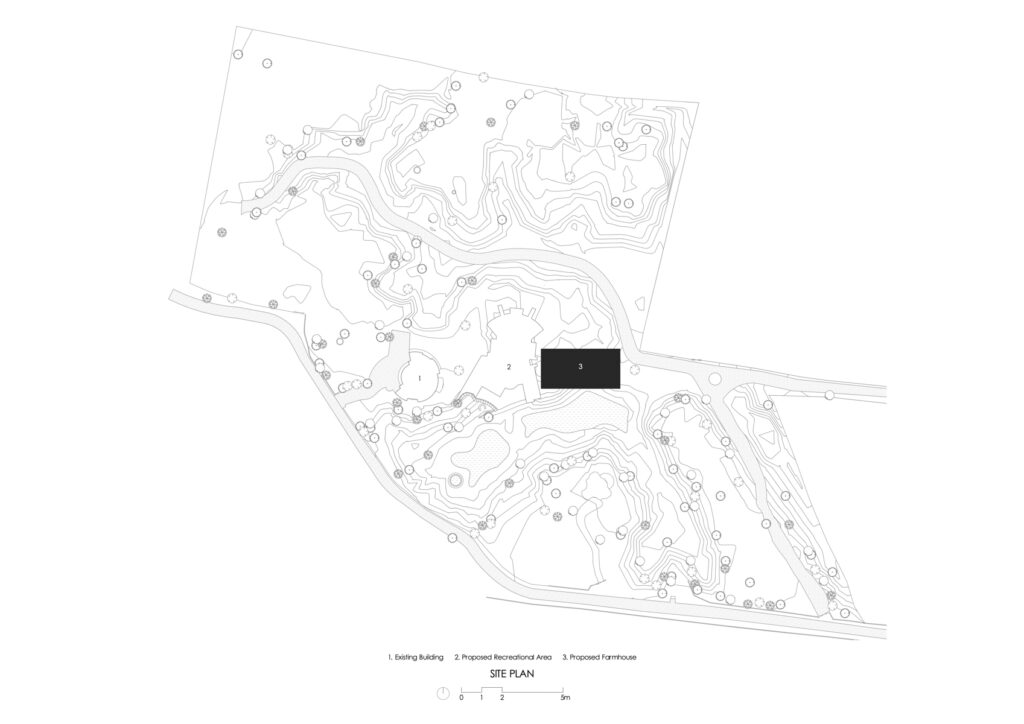 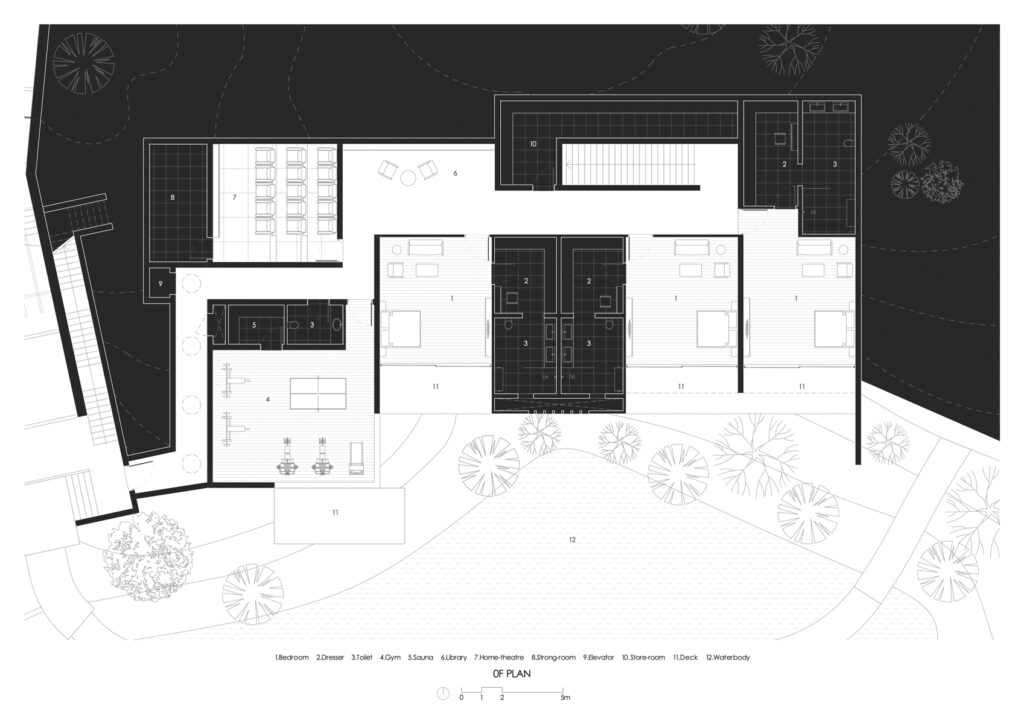 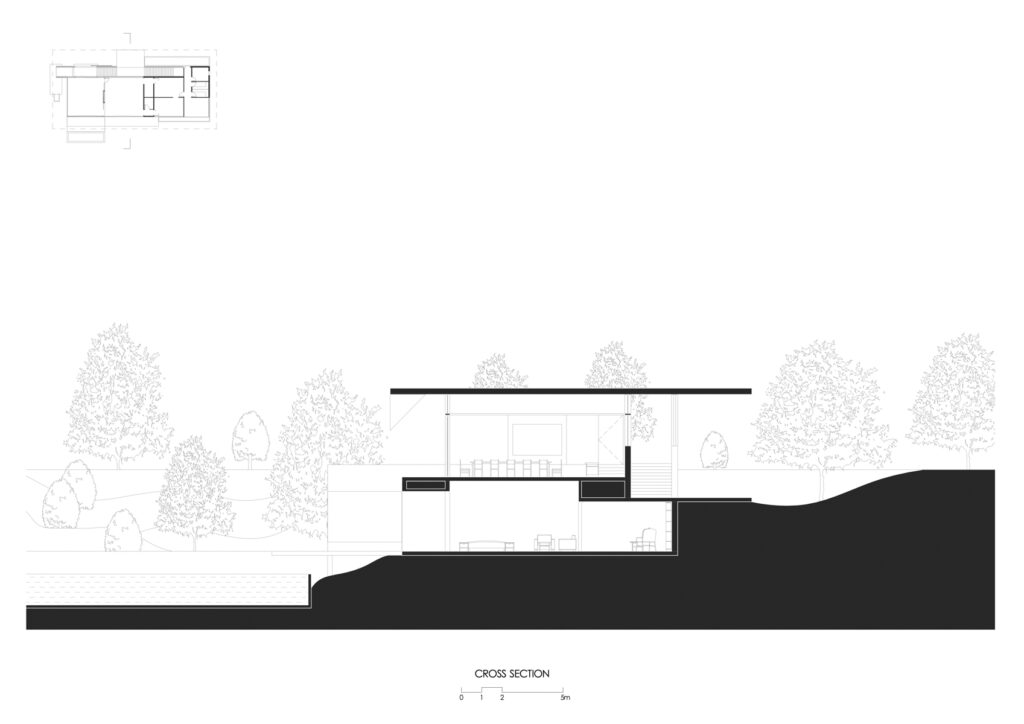 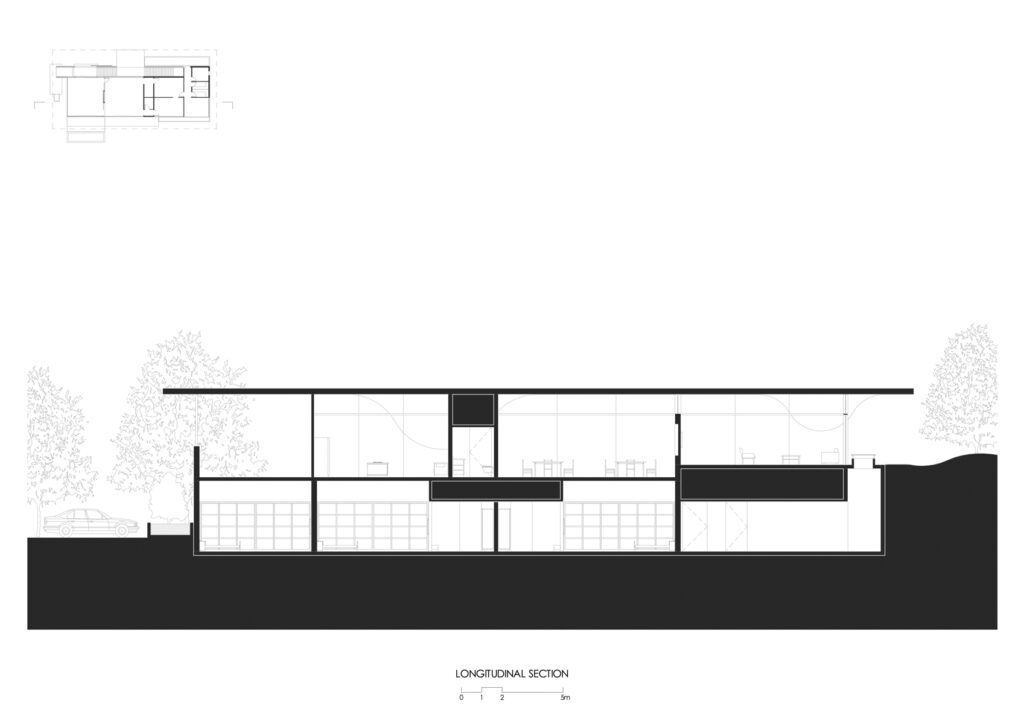 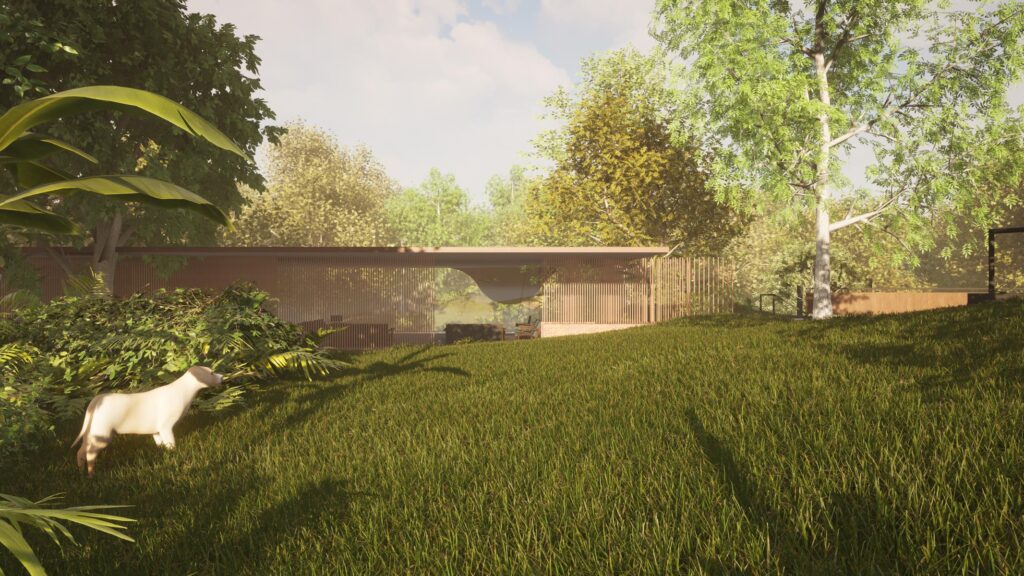 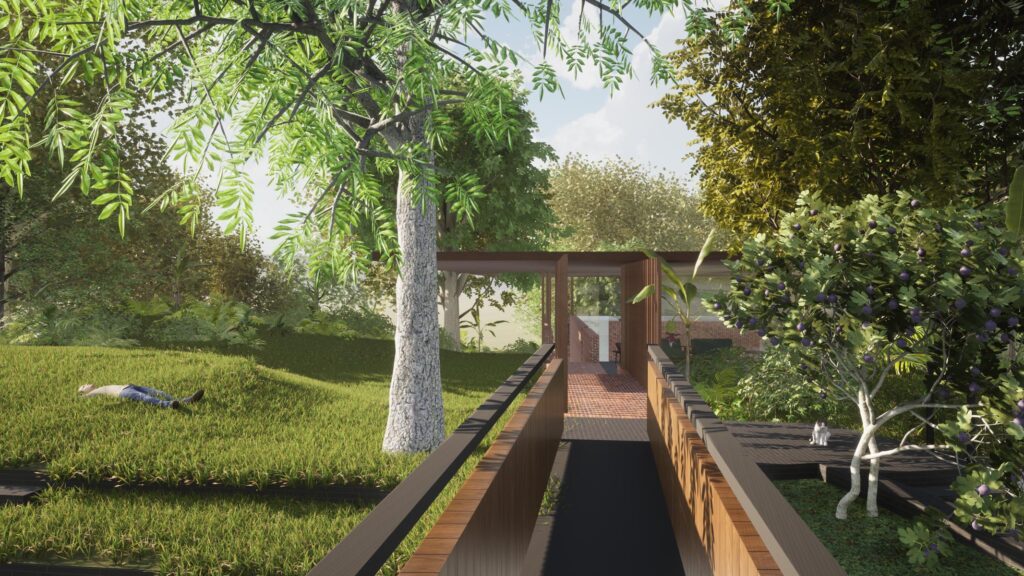 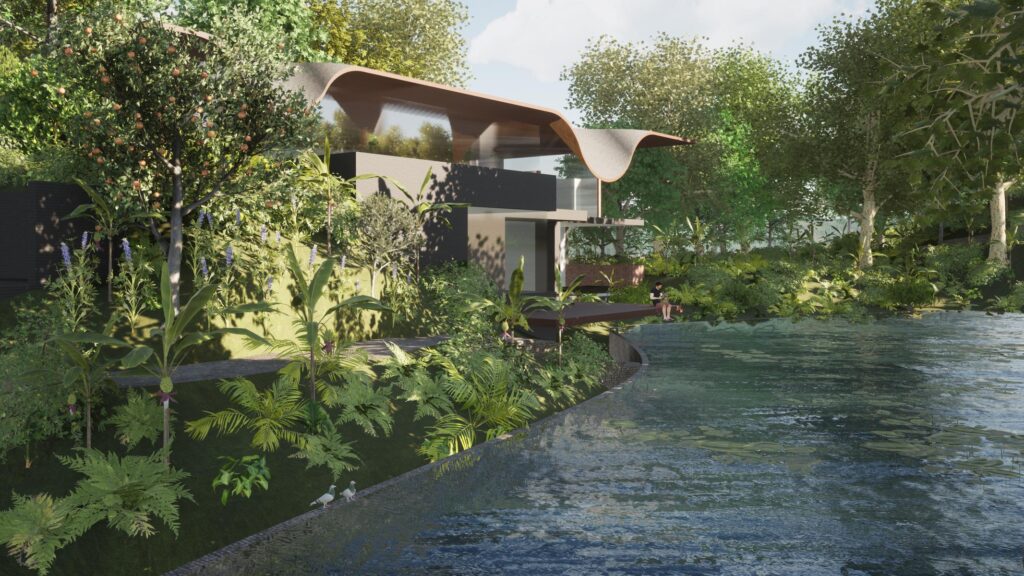 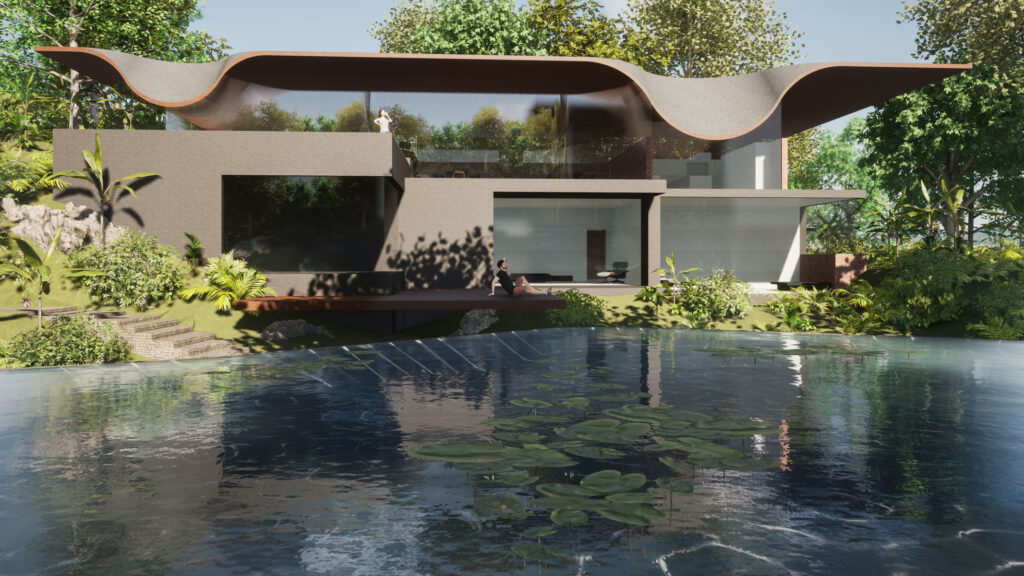 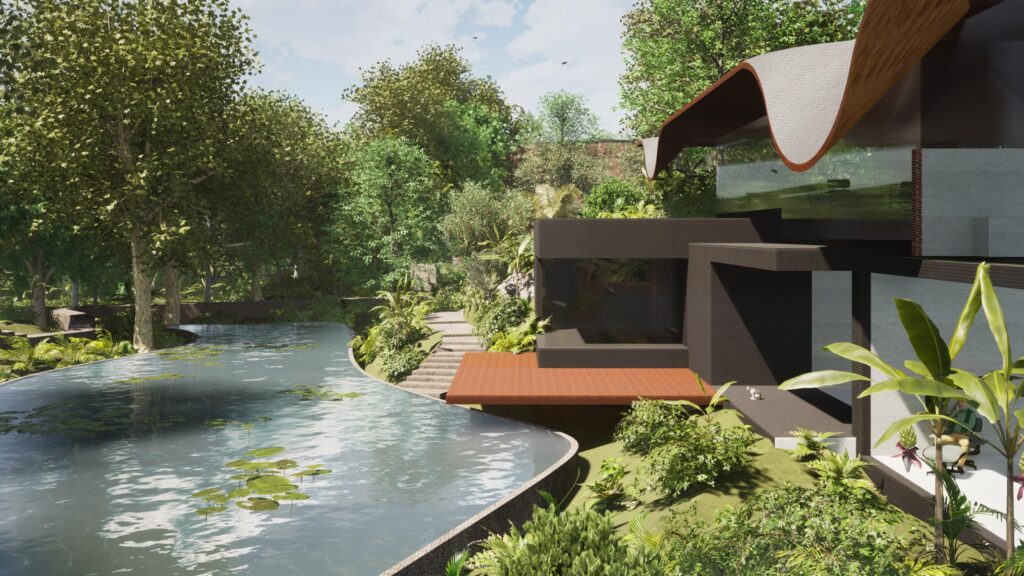